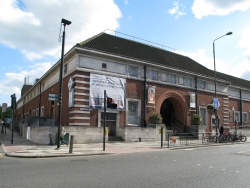 You’d think, would you not, that I would be right at home here. Huge banners float from every lamppost declaring this to be ROYAL GREENWICH and I’m from a Royal Town myself – Sutton Coldfield, as you asked - so it should somehow be in my blood. But in the same way that Sutton Coldfield doesn’t want to be part of Birmingham, I don’t want to be part of Sutton Coldfield, even though they have what I consider to be the best park in the country. I don’t think I’d be welcome anyway; they have their full quota of Labour voter and don’t want me there doubling it.

For anecdotal purposes I should pretend that I’d coincided my trip with the Queen’s visit to the new Cutty Sark; it could have given the blog an extra royal spin, which it’s sorely lacked to date. But it was an accident. The Queen had ‘battled through’ the rain according to my car radio (so brave), and as I battled past, I could see a gathering of huge corporate umbrellas poking out the eyes of the less fortunate, so metaphorical are they.

Some iconic buildings on the way: the Naval College, the fab Observatory, the Noodle Box – but around the corner from these historic slabs the landscape goes comparatively downbeat. It has a very distinct look to it, low-lying under a big bowl sky that’s punctured by huge brick towers; this area bears its labour scars in the architecture of old riverside industries. If you go up high, you’d see for miles, and the hill right by the Observatory gives you that chance; I urge you to try it, to get some perspective, and to look down on all the royal and military buildings in the way they look down on you.

Peeling the massive chip off my shoulder before it drowns me, I get to the pool and go and change. On TV recently, Jo Brand called Streatham a shit hole, and this is the Streatham of changing rooms. The few cubicles have doors hanging off their hinges, the ‘bench’ is a shallow tiled ledge not as deep as my foot is long, so impossible to sit on; there are missing ceiling tiles, through which I keep expecting Nikita to appear. The sink has a black faux marble surround suitable for a Russian motel in the 80s, and there are strategically placed buckets collecting the aforementioned rain (I make a mental note not to use the hairdryer sitting right under the drips). It’s not filthy. It’s just a small crappy mishmash of a box.  A sign on the door telling me to wash my hands for hygiene purposes makes me chuckle with its irony.

I launch myself into the cool water, dappled with light as a tropical pool under the shade of palm trees might be.

The bit about dappled light is true.

And there are actually palm trees, painted ones, on the wall on the top balcony level of the pool.

But there the illusions end.

My normal style is to rail against the dirt and detritus, and I can certainly do that here. The water has a greenish quality as if they took the juice at the bottom of someone’s compost bin and diluted it a thousand times. (Maybe it’s homeopathic compost water…) The concrete lining is the colour of a smoker's fag finger. The ceiling is a horrible arch of pressed-fibre tiles, square lights and dusty grey air vents. It’s underlit to the point of gloom. There’s a stage at one end with a dated mural beach scene. The filter at the bottom of the pool is yicky white plastic, dirty rust creeping round the edges and blobs of manky papery crap trying to escape down into the cleaning system before it fully disintegrates in the water. There are strings of flags across the pool which fail to give it a faded fiesta feel.

But all round the edges, there are little blue wooden changing cubicles with plastic ‘modesty curtains’ shielding the top of the doors, which are very quaint. Original square windows with a deco-ish frame pattern line up round the top of the pool. The lifeguard has a chair that I really want, an old-fashioned white-painted wooden affair. I really fancy one of those chairs so I can supervise play in my garden like a bossy gnome. It’s a 25 yard pool, and the water is chill. Somehow, against the odds and defying logic … I QUITE LIKE IT.  But only for these interior features. It's not quite a party popper moment.

I’m the only swimmer  but not the only person in the water. There’s a man wearing a weighted waist belt, going round and round the pool as if on an invisible bike; I wish to report this as a new phenomenon (do dooo de doo do). He is the third person I’ve seen doing this, in as many months. I think it’s physiotherapy.  I kept getting in his way (accidentally). He didn’t want eye contact as I attempted to do a ‘sorry I’m so annoying’ look, so I left it.

Back in the shower, I had a little rant to myself, Richard Branson related. I don’t know why it happened in this particular pool, because it applies to so many. I blame my coincidental proximity to the Queen. I’ll précis here to avoid boring you all.  I started off thinking ‘I can’t believe the residents of Greenwich are happy with this pool’. Then I realised that probably most of them swam in a private gym pool, and I bet there’s some swanky options near by. And that, people, is the way we are going with all the stuff we should take for granted. I began to draw analogies in my head between this pool and the NHS, and how the divide between private and public is becoming greater, and how much that pisses me off. Councils can’t afford to run fabulous local pools if most of the potential income is going into someone’s personal profit pocket. We need to support our local facilities by USING THEM, and then using our votes and voices to campaign when things are a bit shit.

And that’s my chances of living in Sutton Coldfield scuppered for another year.
Posted by Jenny Landreth at 09:10