The anorak of life 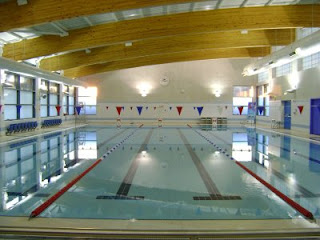 Memory is an anorak (is something that sounds like an Alain de Bottox saying). An anorak that promises to be waterproof, which you believe until you get soaked in a downpour. An anorak with lots of pockets, maybe a fisherman’s anorak. Some of the pockets are easily accessible and contain useful stuff (bits of nylon, fishing flies, if we’re going with the fishing theme). Other pockets have holes in them, so things fall through to the lining and you find the hem of your anorak weighted like old curtains with coins. Sometimes, you find another pocket that’s been there all along but you forgot, and when you put your hand in you pull out all sorts of stuff. A half-empty tin of Fisherman’s Friends, maybe. Some bait (now deceased). Other fishing bits (turns out I don’t know much about fishing).  Today I found one of those forgotten pockets, and what a good deep pocket it turned out to be.

Today I went to a pool in Deptford right near the Albany Empire where I used to work, where I co-founded the country’s first Black Comedy Club, and where I was involved with pre-TV Vic and Bob’s Big Night Out (blimey, that dates me, but as I've said before, so does my age). I’m not going to lay out all the memories my visit brought up, because I don’t want to give away all the good bits from the second volume of my autobiography; I’ll stuff them back in my memory anorak.  But suffice to say, it felt odd, good and bad odd; good for the actual times, bad that they'd been so carelessly tucked away, and were so long ago. The High Street looked quite the same but intrinsically different too, but again, so do I.  I can say, though, that if you want halal meat or gaudy sprays of plastic flowers, this is and always was the place to come.

I was pretty impressed walking up to the pool, but by the building next door. It’s like a great big gold chocolate wrapper of a building, beautiful; a library I think, though it’s not actually called that, how unfashionable that would be. It’s called Deptford Lounge. (Please don’t write in. I know it’s ‘more than just a library’. I’m only ever annoying on purpose.) The pool building is a smaller less-shiny thing, plastered in different waves of blue – wavelength, geddit? – with great big bananas of wood that I think are meant to look boaty, sticking out like Thai temple rafters at the top. At reception, the pool temperature monitor had gone off the scale. Oh yippee. And through the glass all I could see was a ‘leisure pool. A ‘fun pool’. Fucking flumes. Deep joy. And when a woman shouted to reception ‘the changing rooms are absolutely filthy’, it took all my strength not to turn round and go home.

It costs £3.05p to swim here. That’s a strangely annoying amount, yes? And 50p for lockers. Also, annoying. The changing room set up is weird. I got changed then had to clump around clutching boots and jacket and bag and towel and cap and goggles and my 50p, to find lockers and a loo. Lockers are poolside -  there’s another pool! A ‘proper’ (read on) pool! Hurrah! I was relieved not to be forced to engage in fun in a warm bath of baby piss.

This pool is in a small square room like an adjunct; frosted windows in big panes make two thirds of one wall, with clear windows in the top third. The big wooden bananas follow inside, curved up across the ceiling like modern beams, along with crinkly metal and struts. It feels like a great big white metal box. Like a medicine cabinet. Like function over form. This is the Boots of swimming pools. It’s 25m long, shallow (yawn), barely up to my bits when I hop in, but only three-laned when I was there, which means one can do a big circle rather than stopping every ten seconds. There were only a coupla young guys in, gossiping away like they do, not wanting to get their hair wet, so I ploughed my own furrow in silence. The water wasn’t that warm, but it wasn’t that clean, either. Not bitty, but it had a grubby bottom, old hair clips going rusty down there. Not inspiring at all.

So there I was, sloshing up and down when suddenly it struck me: fuck, I’m bored. I NEVA EVA get bored swimming, though I definitely have a short attention span. Normally I find the first twenty minutes a bit dull, but then get into a zen zone of doing my own thinking, sorting my ideas and thoughts into happy bundles. It’s partly why I value my swimming time. But today? Nope. I’d bought a few on-going anxieties in with me so maybe them jumping up and down at the back of my brain like over-active boy toddlers hurling lego around was keeping me from engaging. But this is a pretty uninspiring place. It’s blank and bland. It’s not ‘under designed’, it’s just … dull. Today it's bright and light, which I'm not complaining about - but you know sometimes when the sun shines in and all it does is highlight the dust? That. Today's sun is highlighting the vacuity. Can a pool seem vacuous? Yes, I say. I got out.

“Where are the warm showers?’ I asked the lifeguard. He pointed me through to the leisure pool. I wasn’t about to hoik everything through there. ‘Those ones are cold’ he said, pointing to the ones by this pool. I knew that, from pre-swim. ‘They’ve been cold for ages. They keep saying they’ll fix them’. Oh, I said. I know I swim in cold water, but that doesn’t mean I like cold showers. I’m not some spartan idiot. I cold showered, muttering under my breath. Apols if you were there and heard me. I can be quite rude.

I got dry in the functional changing rooms – which by now I knew matched the pool. Blank and boring. Functional on a basic level.  On the exit door it said ‘grooming area’ - made me think I should have bought a dog with me. It sounded promising but actually was a couple of crappy hair dryers, the kind with the tubes like those things you used to whirl around above your head until they made a whooooooo sound. Rubbish. And out on to Deptford High Street again, thinking, ah well, at least I’ve got me memory anorak. And more options to buy a scrawny halal chicken than I could shake a stick at.