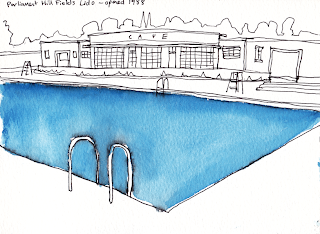 
It's always hard to get out when a pool is so empty, those times come so rarely, but I'm starting to chill. This is an unheated pool - it gets cold, even in summer. Please heed that, and see previous posts about hypothermia.
My swim is enlivened by the sight of a man’s bare buttocks as he scurries to dress, and clearly can't quite remember the code for the door he’s trying to open.
I burned myself on a scalding hot shower.  I'm not complaining, it's my own fault for not working out which way meant ‘hotter’. The café was shut because it was raining. That I do complain about. I was hungry.
I think, as I trudge away from the closed café, that if this was a private pool, oozing with cash, all the facilities would be ‘consolidated, ‘updated’, ‘modernised’. And I thank no one in particular that it isn't. It’s lovely, just the way it is. Lucky lucky swimmers of Parliament Hill lido, which is us.
Posted by Jenny Landreth at 09:52